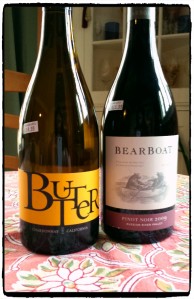 We’re doing an early Thanksgiving this year so the boy child can join us. He works in Chicago so this is our best chance for a family meal. We adapt. I’m grateful that he’s only four hours away. I had a print out of an article on wine recommendations for pairing with turkey and I was excited to see that the Russian River was represented with a few selections. I love the area and I’ve found some really great wine that comes from there.

When I got to the wine department at Goodrich’s in East Lansing, I handed it over to John, their buyer, to get his thoughts. I do this, faithfully, each time I need advice. It’s not because the store is close by. It’s because the folks who run it are true experts who do not carry a single speck of pretentious A-Hole attitude so many faux connoisseurs of food and wine seem to think gives them more credibility. Head’s up wine snobs; it does not. But it does put you on the nomination list for Emperor of Douchebagia.

John looks like a farmer and given our mid-Michigan, surrounding by cows and fields, he may well be. He also has such a wealth of information about wine production, appellations and vintages that I’m thinking he had Neo plug him into the matrix and download the WINE program.

He looked at my list and nodded. “These are really great wines. They’re also really expensive wines.” He looked into my shopping cart at the plethora of herbs, veggies and the fresh turkey I’d ordered from their stellar meat department. ‘You serving these with the turkey?’

I confirmed his guess. “Ya know, you can get these if you want but I think it’s a serious waste of money when you buy $50 bottles of wine for Thanksgiving. There’s so much food and other stuff going on that you won’t even really enjoy it. I say, drink what you like. Wanna stay with the Russian River area?”

Yep. He walked me into the jam packed aisles, filled with hundreds of bottles from all over the world and stopped at a shelf and grabbed a bottle. “Here. Try this. It’s a terrific wine. Trust me.”

I do trust him so I took two bottles. I pressed him for a white for cheese, crackers and fruit and he handed me another bottle. The two bottles of Bearboat 2009 Pinot Noir and the bottle of Butter 2012 Chardonnay came to less than one of the snobby wines I had on my original list. Score!

He could have lied and made a three digit sale. He could have bs’d me into tossing a bunch of other stuff in the cart that I didn’t need, but he didn’t. He led me to a better deal, saving me money and solidifying what I already suspected; he’s more interested in customers being happy and coming back again than he is cutting a hole in my proverbial coin purse to drain out every shiny he can get. I like that. A lot.

So this year, I am going to be thankful for John at Goodrich’s. I’m thankful for his wisdom, his honesty and his candor. Happy Thanksgiving, John.