Seriously…what the hell is this costume about? 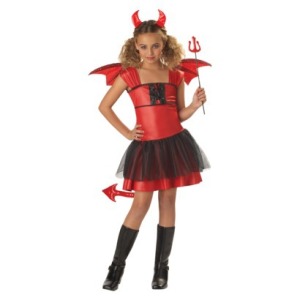 I’ve been following a conversation thread a bunch of female writers are having about appropriate Halloween costumes for their preteen girls. They’re discussing the battle for common sense. One had mentioned that she was looking for a monster costume online and had to wade through “sexy monster” getups to find something a seven year old could wear who wasn’t a child prostitute in Bangkok.

Another listened as her own third grader chattered on about this or that being “sexy”. When she asked her daughter what that meant, she admitted she didn’t know. Mom explained that it was dressing in a way to make you attractive so that someone will want to kiss and hold you romantically. That shut the kid down pronto. Apparently, to her child, the word “sexy” was akin to “smurfy” or some other innocuous and kitschy adjective.

I saw this conversation thread while back in my Illinois hometown for my aunt’s funeral this week. The memories of Halloweens past were thick as a hand full of milk duds tossed into a greedy mouth.

Driving from the cemetery, I had to take Wolf Road, going right past my school friend, Merry’s, house. That’s the house where we all played spin-the-bottle for the first time at her Halloween Party; the big event of the season. Costumes required. It was seventh grade. 1967.

I wanted to wear something pretty and girly. Being the athletic, tomboy type, this would have been a major transformation for me given that my closet boasted a collection of competitive swimsuits, a pair of treasured kangaroo-skin track shoes with long and short removable spikes, a well-worn baseball glove, a rock collection and a bunch of freaky encyclopedias that I read like other kids read Tiger Beat.

MORTIFIED. I was completely, utterly mortified. There would be boys there! BOYS! And the bottle thing! Kissing! Kill me now. No one will want to be kissing George Freaking Washington. I would be the only female not in a girly, pretty, sparkly, gown. I just knew it.

Merry answered the door in a spectacular evil witch costume; hideous warty nose and all. Relief flooded through me that she hadn’t chosen to be the Blue Fairy. A little while later, one of my junior high crushes walked in. He tottered on his high heels, adjusted the hem of the dress and shook out the curls of his bouffant styled wig. There he was; adorable, Kurt. He was a brown haired version of Kurt Russell; startling blue eyes and a soft dusting of freckles on his cheeks. Impossibly, his eyes looked even bluer with the slather of mascara and red lipstick that his older sister had put on him; all the while, laughing maniacally, I would guess. 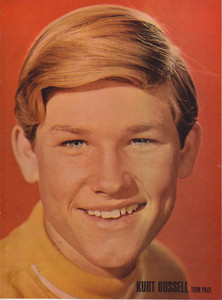 The evening took an instant turn for the better. I even got through the bottle-spinning-kissing-stuff and ended up wearing lipstick anyway. Red. It matched my cheeks when everyone clapped afterwards. Kurt and I won the costume contest and I went home feeling pretty good in spite of my initial mortification.

Two weeks from today, I’ll stand at my door and pass out a zillion bags of candy. I’ll see little Optimus Primes, ninjas, Wii Controllers, Dalmatian dogs and the inevitable blur of tiny hooker-pop tarts whose mother’s caved and let them dress that way because Miley twerked her way into their consciousness.

Those little girls will likely need to up the ante every following year on their “smurfy”, sexy costumes. In ten years, when they’re eighteen, what will they need to wear to feel “smurfy”? They just might end up being the same girls entertaining their creepy elderly neighbor guy at the local strip club.

You know, being George Washington that year for Halloween did not inhibit my ascension to female goddess status one single bit. I spent that evening, at Merry’s party, laughing and talking with everyone; guys mostly. Being a tomboy, they were the majority of my pals. In fact, I’ll bet I had a better time at Merry’s party, than the girls who ran to the bathroom every half hour to make sure their makeup was still looking good.

All this stuff went through my head as I drove past Merry’s old house last Tuesday. Merry, she moved out west somewhere. Kurt, sadly, died of a drug overdose before he was twenty. My mom and her nervousness about my emerging sexuality are long gone with the powdered wig and buckle shoes she’d made in an attempt to make me as gender neutral as possible. Sorry mom. Can’t stop the tidal wave.

I really do hope that parents can get across to their young daughters that there will be thousands of opportunities to dress inappropriately and that each time they do, they will spend more time worrying about their outfit than they will spend actually having fun with the people around them. Just like Miley, they should wait until they are twenty one to lose their minds and behave like they were raised in a brothel by crack addicted parents. Then, maybe these parents won’t have to suffer through years watching their daughter’s awkward grasp at becoming the “smurfy-est” girl in school.

Yes, do that, young tartlets. Leave the smurfing to the older girls. Please.

And save me some candy corn. I love those things…