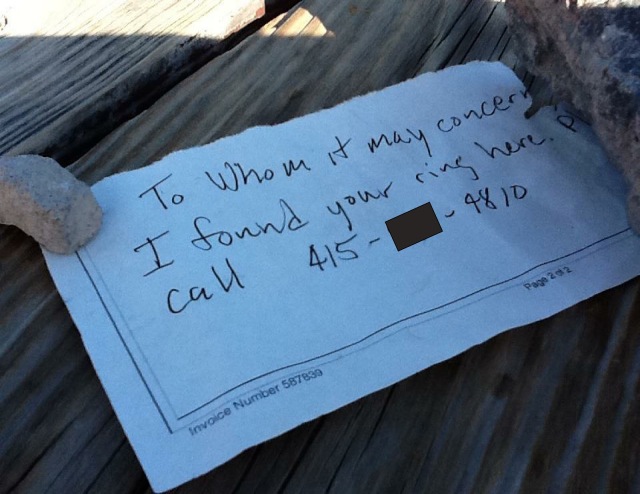 I was up at Mt. Shasta last October. If you haven’t been there yet, then get on it. There’s something very special and sacred and connected on that land and you just have to be there to feel it. Anyway, on a high trail, I stopped at a picnic bench area to have some water from my pack and when I set my stuff on the table, I saw this note.

It was tucked under a rock and waiting for some unknown soul to happen upon. The writer of the note thought the ring had been lost. I was thinking it had been set free. You’d have to be standing there looking up the mountain and looking back and out over the land below to know that no one leaves a ring on a table right there accidently.

It reminded me of a friend who married in her mid thirties. Her first marriage, his second. She was over the moon that she had finally found “the one” and when he was offered a chef’s position at a hotel restaurant soon to open at a very high profile casino in Las Vegas, she happily packed her life in Chicago and headed to the desert with her man. A thousand things came into play in her life, not the least of which was a rekindled dream that there was still enough time to have a child with her new husband.

On a corporate path for so long, she had almost let that dream blow by her like tumbleweed; until he came into her life that was. They settled in and she brought her formidable talent and humor, her artistic nature and her beautiful self 100% into this new life. Not even two years later, she found herself alone, standing on the roadway over the Hoover Dam with her wedding ring in her hand. When she drew back her arm and let it fly out and down into the nothing below, she let him go. He and the cocktail waitress he had been sleeping with those nights he was “working late.”

I wasn’t there when she did it, but I could clearly see her black hair flying in the breeze and her startling green eyes flash and shimmer with the last tear that she would shed for this bastard. She didn’t even cry the next year when he married the cocktail waitress who was pregnant with his child, the irony not lost on her as he had told her about his second thoughts of starting a second family in his forties.

Not all who wander are lost…not all things left behind are a mistake.

I wrote a response to that note on the picnic table in poetry form. I tucked it under the rock and after I had my water and got ready to put my feet back to the trail, I gave a salute to Jennifer. To her new life without him; to the ring that now rests among the rocks at the bottom of the dam, perhaps with a million others, and to moving her feet back onto her own trail, wherever it may lead her.

7 thoughts on “Writing Into The Wind”