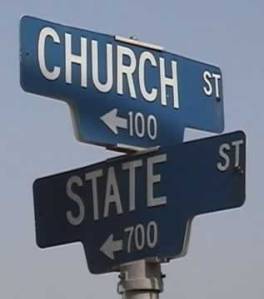 Unless you live under a rock or are just awakening from a coma, you’ve seen the buzz on Hobby Lobby vs. employee health care coverage bru-haha. Our Supreme Court, in a mind twistingly ignorant move allowed some family-owned or other closely held businesses to opt out of a federal requirement to pay for contraceptives in health coverage for their workers. The reason for these companies to push so hard on this issue? Because they believe that some forms of birth control amount to abortion… like birth control pills.

OK, Kiddies, let’s talk about birth control pills for just a moment. The pregnancy process works like this: The female ovary (the little house where unfertilized eggs hang out) prepares to drop an egg into the fallopian tube approximately once per month throughout the female’s reproductive years. In a welcoming party for the unfertilized egg, the party planners of the uterus have decorated their walls with a cheery red carpet of blood. When the unfertilized egg that’s waiting in the wings of the fallopian tube is pierced with a male’s active sperm, it is then considered “fertilized”. It then continues its journey into the party room (the uterus) where the cheery bloody walls act as a queen sized bed for a potentially fertilized egg where it can then go through the gestation process, using the blood as nourishment, and be delivered after completing gestation, out of the body as a full term human being. Ta-da!

Birth control pills, also known as oral contraceptives act as a “cloaking device”, just like the ones the Klingons use to make their way through other people’s star systems undetected. The chemical compounds in the birth control pills trick the sperm into think that the egg is already fertilized and like drunken frat boys, they just writhe around for a while until they pass out and dissolve into corporate America without causing any trouble. The undisturbed egg can then makes its way, safely protected from fertilization, out into the uterus where it can exit the female’s body in the sloughing off of the cheery bloody wall decoration known as menses, or the monthly period-just like Luke, Leia, Han and Chewbacca made their way out of the Death Star by way of the trash compactor. The egg doesn’t get fertilized in that scenario.

Hobby Lobby and other No-Choice organizations, being the cutting edge science researchers that they are, have decided that these pills are a form of “abortion” because they have chosen to define an unfertilized egg as a “person” and they have chosen to “opt out” of the government health program’s family planning coverage…for their employees.

Let’s cut to the chase and call this what it is. This is an end run, chicken shit, back door way for members of religious groups to put the squeeze on anyone working at their companies who do not adhere to their particular religious beliefs. Let’s just say it. If they had their way, they would not hire non-Christians right from the get go so they wouldn’t have to mingle with the cooties of non-believers, but the “law” (insert tongue cluck and eye-roll here) says they are not allowed to discriminate based on sex, religion, race, gender, age etc.

It doesn’t seem like a big deal to open the door to this sort of round-about discrimination, but this small wedge allows much larger policies to slide their religious policing policies right out into the main stream.

Imagine this- it’s 2015 and Loretta Johnson, who has had the same family physician for many years, needs to refill her birth control prescription. She now has a choice: she can either go to her family doctor, pay her co-pay for an appointment, get the written prescription, have it filled at a drug store paying full price for the prescription (today- $41.99 per pack at Walgreens, or $503.88 per year). Note: Back in 2012, when her health insurance covered her family planning prescriptions, she paid $15 per month or $180 per year.

Her second option is to find a local women’s clinic or Planned Parenthood. She will make another doctor’s appointment taking more time off work and when she arrives she must first run the gauntlet of religious nuts who are protesting – now right up to the door as they just won a ruling saying they didn’t have to stay back far enough so women can safely enter. Once inside, she’ll have to pay her co-pay determined by her insurance provider plus between $10 and $50 for her pack of birth control pills depending on the ones her body will tolerate. Note: a vasectomy for a male is a short office visit with local anesthetics, costs between $300- 1000 and once it is done, there is no need for their female partner to use any kind of birth control ever again…but that is another story of epic gender cowardice…

So what are businesses like Hobby Lobby really up to, on a larger scale? Let’s zoom in on that Gauntlet of Religious Nuts. If the religious right had their way, Planned Parenthood would not exist. If they had their way, birth control in any form, would not be available. Since we still maintain a small bit of common sense, there are medical services that exist that some church folks want gone but short of witch burning, Spanish Inquisition style wholesale slaughter which is now, thankfully illegal, they are relegated to annoying the shit out of people in any way they legally can. Beyond the service of abortion, places like Planned Parenthood offer breast cancer screening, pap smears and family planning options. MOST clients go for non-abortion issues, but that’s not what the religious right wants to believe. Here, grab a case of Tums and read some first-hand stories of what women have to go through when they want to make a visit to a women’s clinic. http://www.cosmopolitan.com/celebrity/news/abortion-clinic-protesters

Imagine the year 2022 if America stays on the strange trajectory the religious right is hoping to keep us on. Companies can now create “religious friendly workplaces” for their own religion exclusively. Students graduating from high school or college must now locate places of business that align with their own personal beliefs and from that pool, they can then submit their applications for employment. Even though employer discrimination against, sex, religion, race, gender and age is still illegal, the door to “religious friendly workplaces” was opened in 2014 with Burwell v. Hobby Lobby. Religion friendly work places have just brought all their once private practices out in the open and they have created environments where those not of their religion feel so uncomfortable in the setting that they choose not to work there. The more applicants avoid applying to cross belief work places, the more polarized to one religion the workplaces become and the closer they arrive at being a 100% same-belief settings effectively circumventing the anti-discrimination laws. They will serve only their special brand of KoolAid in the employee cafeteria, all day, every day.

That could be coming if we don’t wake up and do something right now.

So how did it get this far; this back slide into the middle ages when women were breeding stock and property and their freedoms were determined by guys in dresses and guys in general? Glad you asked. Have you ever had a person come to the door of your home and ask if they could talk to you about their religious beliefs? Of course you have. Have you ever been stopped on the street, handed a pamphlet, been harassed in a subway or other public transportation building when some stranger decided to butt into your day and prosthelytize? Of course you have. Now, take as long as you need to think about this question… Have you ever had someone knock on your door, stop you in public, harass you at an airport, or hand you a pamphlet trying to get you to join the atheists or spiritual free thinkers who do not follow an organized religion? Of course you haven’t. Why? Because we are busy living our lives. We are too busy to spend all day everyday sticking our noses into other people’s lives attempting to convert them to our way of thinking. That’s why.

We don’t care what your personal, private, religious beliefs are. We do care of you are trying to shove them down our throats. Sadly, while we have been busy living our lives, like an infestation of roaches in the kitchen, religious groups have been scurrying from their pews wielding their bibles out into the midst of the free thinkers. Out here, they are systematically eating away the fruits of our labors; the very laws and freedoms we now take for granted because we could not imagine that anyone would have so narrow a view of the world that they would spend their time trying to bend the will of anyone else to their own way of thinking.

We couldn’t imagine, after the Spanish Inquisition, ethnic cleansings, holy wars, witch burnings, and the massacre of millions of “heathens” by church followers throughout human history that in the year 2014 there would still be people busy at dismantling our freedoms. But there are. And they run places like Hobby Lobby. And for every small bomb they lay beneath anti-discrimination laws there are a dozen more explosions attached that will be coming at us when they drag in behind the opening salvo. They’re dragging mines. We need a big old can of whip ass Raid and we need it now.

We need to fight fire with fire and that fire is money. Religion has, for too long, had a free ride in this country. They have hidden behind tax exempt status while campaigning, politicizing and sticking their noses into legislation even though the tax exemption requires a non-political involvement. Tax exemption should be removed from all religious organization, they should be audited and the trillions of tax free dollars they are currently using to buy and place their puppet politicians should be brought into government coffers. It should be used for the things America needs right now; road repairs, bridge repairs, infrastructure, free school food programs for all children and affordable higher education that allows us to compete in a global market.

And if we don’t find a way to do something BIG to stop this trajectory, then we will be revisiting a past that even they won’t want to be living in. And by “we”, I mean people who believe that individuals should be allowed to make their own decisions regarding their physical bodies.

If we don’t change direction we will end up where we are going.

An Independent Non-Discriminatory Platform With No Religious, Political, Financial, or Social Affiliations

Funny Blogs With A Hint Of Personal Development